These things happen, they say.

You’ll look back and laugh about it, they say.

Well, I cried about it.

We had just come back from a quick overnight trip to the mountains. We had mostly unpacked, the kids were playing with their toys we’d left behind (because 24 hours away makes them seem new!) and Hubby and I both had some work to get done. While he started getting ready for his gig, I retreated to my computer to do some work for my service on Sunday. I was probably out of the room (the living room… where everyone else was) for about seven or eight minutes total, when I came back through the house.

I wasn’t alarmed yet. She often took a plastic toy knife and sawed away at her own or her brother’s hair, jabbering on about haircuts. But I quickly saw that this time, there was no pretend sawing happening. My pink-handled scissors from the kitchen drawer were being used to strew my son’s perfectly virgin curls all over the floor. Tears welled up in my eyes as I realized what couldn’t be taken back: he had just received his first haircut. No little ceremony, no taking pictures, no sweet, little-boy ‘do resulted from this experience. Just a jagged chunk taken from over his left eye. And now? Nothing left to do but just take that line all the way across his forehead.

So sitting in the floor, tears blurring my eyes (safety first!) I took the blasted scissors, and finished the job. Of course, he figured he didn’t need to sit still for me, so it took a couple of tries to get a semi-straight line of “bangs” across his big noggin. (I want you to know I’m still crying a little as I write this.) 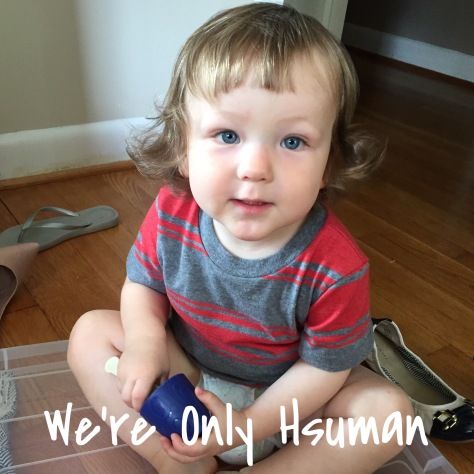 A couple of days later, we’d started to get used to his new look. At least we didn’t have to swoop the bangs over to get them out of his eyes, right? Anyway, one evening J took a big spill and bonked his forehead on a door, right between his eyes. After I got him calmed down, gave him some Tylenol to ease the blow, got him snuggled in my lap and his whimpering stopped, I only had one thing to say. I looked up at my worried mother-in-law, who had helped me get him calmed down, and said, “Well, if EK hadn’t cut his hair, we wouldn’t even be able to see his giant bruise!” 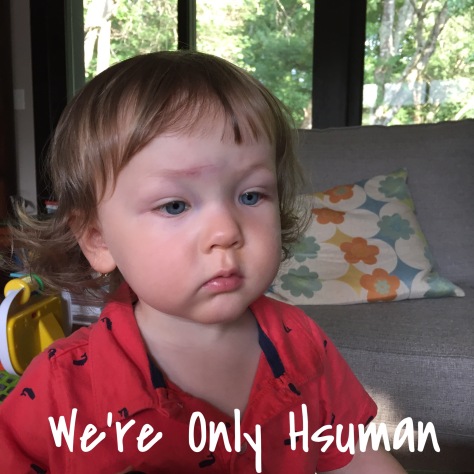 7 thoughts on “My Son’s First Haircut: A Total Toddler Travesty”