Hey y’all! Happy Tuesday! I don’t know about you, but yesterday was the most underwhelming snow day there ever was. We sledded approximately four times, and the ground was showing through. It was a huge disappointment, especially considering how cold it still was. Anyway, here’s a bit of humor from our week! 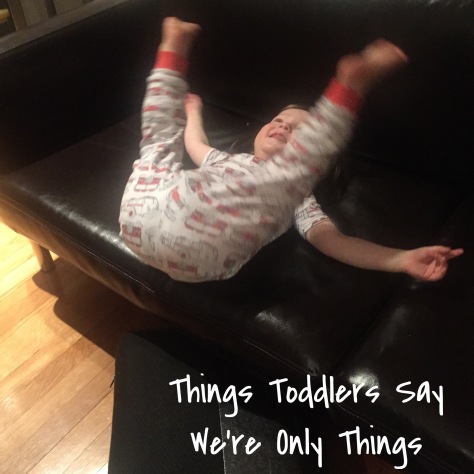 Me to Hubby: I’ve got rehearsal tonight.
EK: I’m going to really miss you while you’re at horsell tonight.

Me: Stop! I’ve got a cramp in my foot!
J: You gotta crap in your foot?

EK: Does J have school today?
Me: Yes, you both have school, and I have work today.
EK: And Daddy has work to clean up the kitchen?
Dying.

I found EK’s sippy cup in her underwear drawer in her room. When I asked her about it, she just said she needed somewhere to put it.

EK, trying to play pretend: J, you’re going to be my sister.
J: I not a sister. I Joseph!!

Every time I turn on Disney’s Robinhood (the animated one), J says, “The Jungle!” which is what he calls Jungle Book. I suppose talking animals all seem the same to him.

EK: Look, Mommy! I’m gonna do something so cool!

I’m pretty sure this isn’t what it’s made to do.

EK: I have a baby in my tummy!
Hubby: Oh yeah? Who’s the father?

Ek’s Sofia figurine was in the middle of the floor, and Hubby stepped on it. He exclaims, “Agh! Sofia the worst!” So naturally, I launched into a rousing rendition of that song from Robinhood that all the animals sing: “Too late to be known as John the First, he’s sure to be known as John the Worst! A pox on the phony king of England!” Except I sang, “She’d like to be known as Sofia the First, but she will be known as Sofia the Worst!” J burst out laughing (he had just woken from his nap), and I asked him if he thought it was funny. He got really serious, and said, “No!” as if he was upset I had offended Sofia.

Overheard while my big kids were playing together…
EK: We can do it! I know we can!
She’s such an encourager.

As J chases EK around the kitchen…
EK: Daddy! Help! Can you save your baby squirrel from my mean old Joseph?!

So what are you kids saying these days?