My husband whisked me away last week for a whirlwind trip to NYC. There were several reasons (excuses?) for the trip, including a special concert, my recent birthday, and a desperate need of time off during a busy season, and it was well-timed and perfect. While it was short (48 hours, to be exact), it was just what we needed to relax a bit and treat ourselves before we stopped sleeping entirely.

1. Eat all the fancy food. Of course when you’re in NYC, you get a little crazy about finding good food. But Hubby and I went to restaurants we’d never dream of taking the kids. There was no macaroni and cheese on any menu, and we ate adventurously (as is our favorite thing to do).

2. Walk quickly. The pace might be a bit quicker there, but we power-walked everywhere we went. We were able to make the most of our time (and not spend a fortune on cabs) because we could be quite quick. There were no strollers, no one hanging onto us or needing to stop and rearrange their sock. We strolled around the city, Googling and Yelping to find our next destination as we walked. It was amazingly simple and free.

3. Abandon the schedule. We are whenever we were hungry, and even if we weren’t. We stayed up really late. We stayed out the entire afternoon, whereas usually we are bound by naptime. There was nowhere to be except wherever we wanted. And most importantly…

4. Sleep late. I’ll be honest, the first morning, my body clock woke me up at 7:30. But I looked at the time, rolled over, and slept two more hours! It was glorious!

5. Call home a lot. We FaceTimed and texted my aunt (who kept the kids) a couple of times a day, just to make sure things were alright. And to share what we were up to. But not because we missed the kids. Nope. Not much.

It was a great time away, and fun to remember those things you get to do without your tiny buddies. But you sure do miss them while you’re gone.

Well, part 2 of our Texas travels last month is finally done! After a lovely weekend in Dallas, Hubby’s parents and the two of us rented a minivan (our first, ha!) and drove to Austin to Hubby’s uncle’s house. We spent two and a half days seeing Austin through the eyes of locals, and it was awesome!

Sunday evening, we had a nice meal at their home, in a surprisingly hilly neighborhood. Austin apparently has a less-than-flat terrain, and the next morning, after some breakfast tacos (here’s looking at you, Tacodeli!) we took a hike in a nearby park, called the “hill of life”, that led us to a stream. It just so happens that Austin has been getting an unusual amount of rain, and so the stream was more like a river. I still did a little wading! 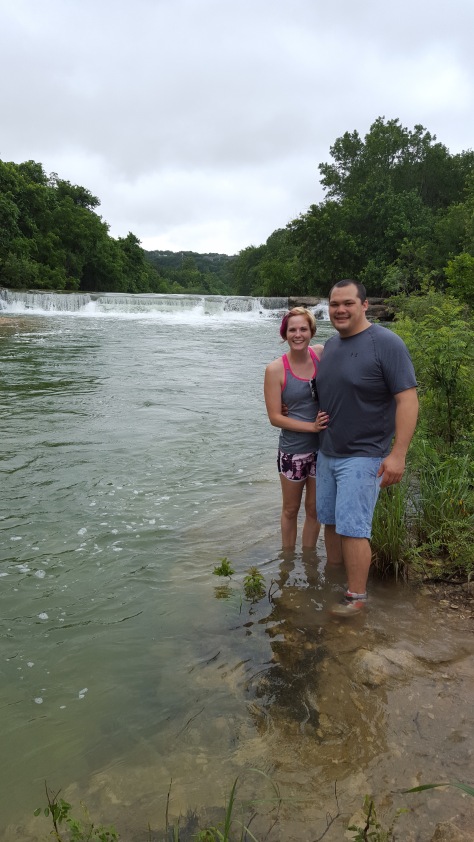 Monday afternoon, we had a late lunch at Hopdoddy Burger Bar. I can’t say enough how creative and delicious that place was! They had great beers on tap (Hubby and I drank local beers) and awesome, creative burgers. They also had truffle fries (WOW!) that rounded off a big fat lunch quite nicely. It was really fun, delicious, and also good that we had a late lunch… Peak meal times are usually SLAMMED.

That evening, we headed downtown. First, we explored and had pre-dinner drinks at the Driskill, an historic hotel (1886!) and bar in downtown Austin. It was beautiful, authentically furnished, and made you feel transported in time. Everything was leather or cowhide, with a big Texas “lonestar” all over it!

We had dinner at Cantina Loredo, where delicious, modern Mexican food and creative, strong margaritas reigned. After dinner, we went bar hopping again with our cousins, and enjoyed ourselves immensely, seeing their usual places and meeting a few of their friends.

On our last half a day, we had breakfast at Texas Honey Ham – the baked potato hash was to die for – followed by a little exercise. We happened to pass Stevie Ray Vaughn on our way.

(As a point of interest, Austin had been getting so much rain, and continued to get it, that the next week, we received a picture of Stevie, up to his hips in water.)

We went back to the house, packed up and prepared for the airport, and had a last lunch at County Line on the Hill BBQ. I had heard of but never tried Texas BBQ, and I was not disappointed! I ate way more than I should have, but it was delicious, and had a gorgeous view to boot. It was the perfect last meal! 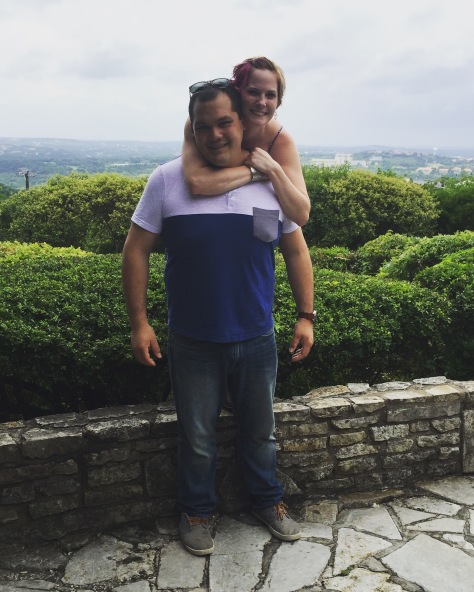 Overall, we had an amazing time in Austin with our sweet family, and I even came home with a perfect pair of boots. (Thanks, Cavender’s!)

A couple of weeks ago, Hubby and I took a trip to Texas. It’s the second time we’ve gone there together, and the second time in less than 6 months! Hubby’s god-brother was getting married in Dallas, and we went to his wedding. After the weekend of celebrations and exploring Dallas, we went to Austin for a few days to spend time with his aunt and uncle. (I’ll soon write a separate post about Austin.)

Our trip started a little bit rocky, as we BARELY missed our flight out of Charlotte. It just so happened that early Friday morning was a popular time to fly, and security was PACKED and quite slow. As we watched our boarding time come, we stood there waiting and waiting. Finally, we got through security and RAN (not kidding) to our gate, we were about 90 seconds too late. We begged and bribed the attendant to let us on, but – we later found out – there were TSA agents standing close by, and she didn’t want to reopen the door in front of them. I guess I don’t blame her; safety and stuff. Anyway, she happily put us on the next flight, about 80 minutes later, and sent us off to breakfast. Obviously, this happened:

We still arrived in Dallas around 11, local time. And you can tell, right when you get off the plane and look around, that everything is bigger in Texas. It must be the way things are spread out, and how much extra space they have. Anyway… We took an Uber (thank goodness for Uber while you’re traveling!) to our hotel, the Hyatt House in Lincoln Park. Most of the wedding people stayed there, so it was full of friends and very affordable, and pretty nice to boot. Our first objective was lunch, so we went with a Mexican place that was walking distance from the hotel. Blue Mesa Grill was a higher-end southwestern place, and we were very pleased. To top it off, they had delicious margaritas and the service was great! 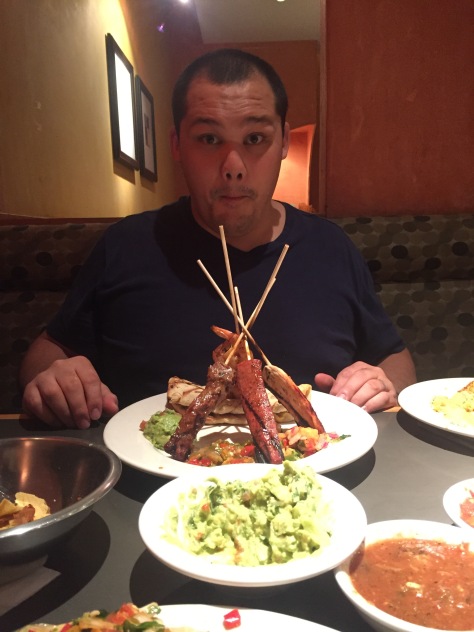 After lunch, we did some shopping at the Northpark Mall, also within walking distance of our hotel. We hit up a few stores, but really nailed it in Lucky Brand – we both needed new jeans! After our shopping excursion, it was definitely time for a nap. Our 4:30am wake up time was a looooooong time ago.

The rehearsal dinner that evening was at the Dallas Arboretum. It was gorgeous, outdoors at sunset, overlooking a lake. 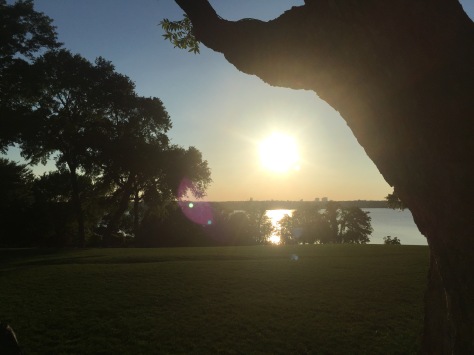 We loved the location so much that we came back the next day to spend some more time looking around. After the dinner, we followed the younguns (aka the wedding party) to The Rustic, the biggest bar I’ve seen to date. Clearly a kitchen and music venue, but mostly a bar, it had a huge inside and an even huger (yep, I said it) outside. We got there to hear the band’s last song, but the night was far from over. There were inside and outside bars, tables, chairs, and lawn to hang out on. SO MUCH SPACE! So obviously that was where we closed out the night.

Back to the arboretum in the morning: it’s just $15 to get in, and there are 60+ acres of gardens, fountains, trails and places to sit and chat or read. There’s also a children’s area, with a splash pad and several other things specifically for kids (we didn’t get to check it out since we’d left the kids in NC). 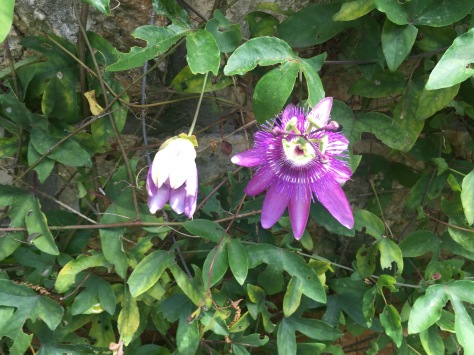 When we left the arboretum, we walked to White Rock Lake Park to get some exercise (it wasn’t far from there – it’s the same lake the rehearsal dinner overlooked) and ran until we were famished for lunch. We picked up an Uber (right there in the park!) and checked out a local taco joint: Tacos La Banqueta. We just looked up “best tacos in Dallas” and that place came up. When we got there, it was literally attached to a gas station. A little off-putting, but I’m glad we stayed, because the tacos were delicious and cheap. It was clearly a local, hole-in-the-wall type place, perfect for a (sweaty) quick lunch.

Back to the hotel for a little pool time, and getting ready for the wedding, an amazingly intimate and beautiful ceremony. After that it was drinks, dinner, and dancing all night long! We had a great time celebrating the couple, and seeing them off to their honeymoon!

Sunday morning, we got up, packed up, and went with Hubby’s parents to Austin! They rented a car and drove, just about three hours. I’ll write a separate post about Austin for ya next week!

Have you ever been to Dallas? What do you like best? Are you FROM Dallas?! What do the locals love?

Trying to Figure Out How to Get Paid to Lay on the Beach...