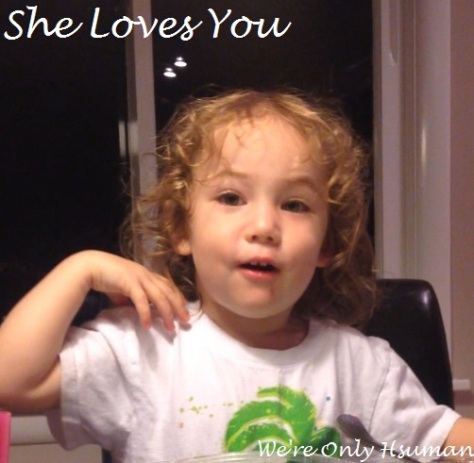 With kids, everything happens in stages. Stages of waking up every few hours, and stages of sleeping through the night. Stages of independence, and stages of debilitating neediness. Stages of picky eating, and stages of so hungry they’ll eat sidewalk chalk after a three course meal. These stages – seasons, I like to call them – go by alarmingly fast sometimes.

Recently EK has entered into a season of snuggling, hugging and kissing. Voluntarily showing love, basically. It’s particularly merciful because this season is on the heels of a difficult season of not wanting to sit still enough to snuggle, yet screaming and crying if we left her for even a moment. But she has (for the time being) moved on to confidently knowing we’ll come back, and giving us smooches for the road.

For instance, the other evening I was leaving to go to a birthday party, and left the kids with a friend. When I announced that I was leaving, told her I loved her, and turned toward the door, she ran over to me saying, “Hug! Hug!” So of course I picked her up, and she said, “Bye bye mama. I miss you.” Talk about melting a mama’s heart. I mean, seriously… when I pick her up to hug her these days, she snuggles my neck, pats my back and strokes my hair! It’s truly a Pat yourself on the back, you good parent, you! sort of thing. The gestures of love she’s received from Hubby and me are being given back to us. She has so internalized our love and the way we show it that she is giving that love back out.

What if we, as children of God, took the gestures of love shown to us by the Father, and gave it back to Him? Or better yet, passed it on to others? The Heavenly Father gave up his only son for you. And me. And our families. And old folks in nursing homes. And inner city children. And celebrities. And sleazy politicians. And murderers and thieves. He loves us (all of us!) that much. As much as I love my children (a ludicrous amount), it’s only a fraction of the love God has for me. If we take even a portion of the love and blessing we’ve received from the Father, and multiply it by passing it on? That’s Kingdom business.

Join 871 other followers
Follow We're Only Hsuman… on WordPress.com