When I announced to my friends that Hubby and I were taking the bigs on a whirlwind trip to Disney, some people thought we were crazy. And maybe we were. We flew early Tuesday morning to Orlando, checked into our hotel, ate a quick and early lunch, and got on the monorail to the Magic Kingdom. We came back a few hours later for naps (and beers for Mommy and Daddy, because we stayed Club Level, which included a happy hour). Then back to the park for dinner and more rides. When they started roping off the street for the nighttime parade and fireworks, we hopped on the monorail to go back to our hotel, clean up, and then catch the fireworks across the water from there – while we had dessert!

The next morning, the kids were up early, so we showered, packed, went to our character breakfast (more on that in a minute) and headed out early. We were in the MK soon after it opened, and we spent the morning having a great time, had some lunch, and the kids passed out in the stroller. So naturally, Hubby and I took turns on Space Mountain, and did some shopping while they slept. When they woke up, it was back to the monorail, visiting two of the other resorts (I mean, we are definitely going back soon and want to make an informed decision on where to stay!) and then our shuttle back to the airport.There were definitely a few things that didn’t go as nicely as we planned, such as the kids not staying/falling back asleep in the car on the way to the airport. We had left the house at 5am, and I had been hoping they’d sleep another hour. The fact that they didn’t caused some turmoil in my poor son’s day. He doesn’t do well on no sleep. But there were also things that were even better than we thought. For instance, we arrived at Main Street USA seconds before a parade began. The kids saw tons of their favorite characters within half an hour of getting inside the park! And it was a really exciting kick off to their trip.

For J, because he’s a two year old boy, the most exciting things were the trip on the airplane and the monorail to and from the park. He is easily pleased by transportation, so he was a happy boy. Even his disappointment in not being able to run around on the airplane was curbed by juice, cookies, stickers, and, most of all, sitting next to the window.

For EK, she loved riding rides (and being tall enough to do just that) and catching sight of characters, even though we didn’t wait in line to see/hug a single one. This is the only trip that will fly, because they didn’t really know what they were missing. Hubby and I knew we could’ve pushed them a little harder or waited on longer lines to do more/different things, but they were happy sitting in the stroller and watching a lot.

Speaking of the stroller, I am REALLY glad we had it. It was more comfortable than the plastic bucket ones you can rent, and way easier in the heat than carrying or wearing them. They were even able to be in the shade most of the time because our stroller has great sunshades. They also napped well in it the second day, since we had checked out of our hotel that morning. We actually Googled “places to let babies nap in the Magic Kingdom”. The answers were somewhat disappointing. Most of them had since become places that strollers weren’t allowed.
What ended up happening was during our Space Mountain Fast Passes (just after lunch), Hubby and I tagged out to be able to ride it. While he was in line/on the ride, I strolled our kiddos around the back of the building, just being curious, right? I found a small smokers’ area, but just past that was a lovely walkway, next to the speedway, but far enough away that it wasn’t loud. It was a fairly quiet stroll all the way to where the Dumbo ride is located. We just strolled back and forth to wait for Hubby to be finished, but by the time we’d gotten back to where the real noise was, the kids were heavily enough asleep to not care that it was loud. 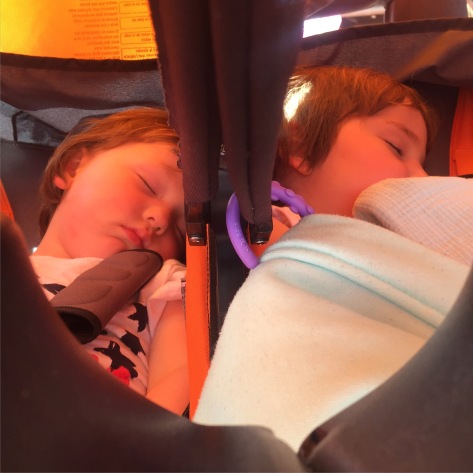 We proceeded to shop a little, have a snack, try to get on the ferry (no strollers there, either) and actually decided to leave on the monorail and visit a couple of the other resorts before they actually woke up. It was awesome. And after that, it was just a beer at the hotel waiting on the shuttle to the airport.

Have you taken your small kids to DisneyWorld? What did you think? Any tips for us when we go next time?

2 thoughts on “DisneyWorld with Toddlers: It Wasn’t So Bad!”