My family is a Disney-loving crew. Hubby and I grew up watching the movies, visiting Disney world, collecting paraphernalia and loving every minute, so why shouldn’t we do that with our kids?

That being said, we recognized this year as the perfect year for a group costume. We could still dictate what the kids would dress up as, and pull off a silly, matching family costume. Because we’re a group of five, we decided on the Incredibles.

True story: Hubby and I were Mr. and Mrs. Incredible before we had kids (see below) because we happen to have pretty good body types for it – aka Hubby is a big, strong dude, and I have short hair and hips. (Disclaimer: our attempt to make Hubby’s hair blond simply turned it green. Oops.) 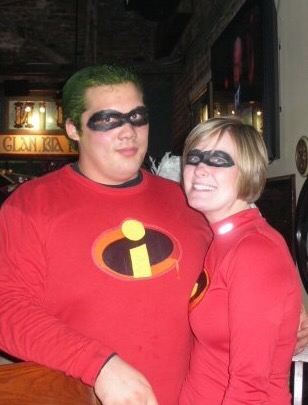 So naturally, with that being our best costume together ever, we decided to bring it back with our three kids. I started looking for the costumes (less iron-on this time) and rounding up everyone’s parts. I got really excited, and let the kids run around in their outfits several times. This week, Hubby and I finally tried on ours!

We aren’t huge people. Okay, well, fine. Hubby is a heavyweight wrestler, but I ordered him the largest size so it should’ve been fine. But I’m not a huge person! And I ordered my costume based on their sizing chart! I should’ve known that superhero outfits would be… well… tight. And that a $30 costume wouldn’t be… uh… totally well-made. So naturally, Hubby and I are melted and poured into our costumes. Because I ordered them according to size charts. UGH I don’t want to go to my church’s Trunk or Treat in a costume fit for a Sig Ep party. So I get on figuring out how to be a little more comfortable and less… risqué.

It just so happens that I have a friend who had the same idea I did – family of 5 Disney lovers, young kids – obviously they’re also the Incredibles. I shot her a text – “What do I do?!” She said, “Oh, you’re also Elastigirl: Brazilian Edition?” Yikes. Looks like we are both in a pinch – literally. We each brainstormed ideas of what to put on top to just cover up – black bathing suit bottoms? Probably not that helpful. A tutu? Black granny panties? Finally I decided on a black skirt I have that would cover more than a tutu would, and be more comfortable to boot. Hubby decided to wear a pair of black shorts over his, and a red shirt underneath. Preventing a wardrobe malfunction was a little more difficult than I had anticipated.

So now, after much deliberation on what to wear, how to wear it, and all the excitement building for the last few weeks, two out of our three kids are sick. The other probably will have it soon, so she’s also in quarantine. No trunk or treat. No visiting neighbors. No collecting candy from every house on the block. No wearing our costumes, unless it’s while we sit in our house with the lights off. This Halloween still ended up being a huge fail.


This post is part of my NaBloPoMo, where I publish a piece every day in November. Many of the posts will be writing exercises, sometimes straying from my usual style.

Trying to Figure Out How to Get Paid to Lay on the Beach...